Lying on my back, I stared into the golden rays streaming from the dental light fixture above me. The parabolic curvature of the reflective surface behind the bulb realigned all the light rays so that they marched forth in neat, parallel lines only to be swallowed up by my gaping mouth.

The light was made by Pelton & Crane. According to its website, it’s called the Light Fantastic II and comes equipped with a remote activation panel (“when used in conjunction with a Pelton & Crane Spirit 3000, 2000 and 1500 dental chairs”), triple axis positioning, and ergonomic metal handles.

The reclining chair, mouth rinse sink, and mechanical arms looked futuristic; the tray of menacing periodontal scalers and curettes were medieval; and the look on the doc’s face was simply bored. 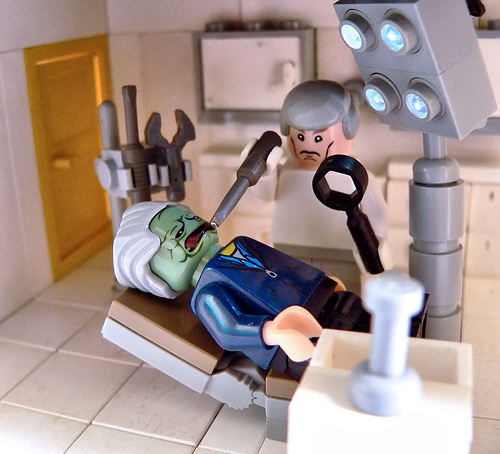 I could never bring myself to stare into the eyes of my dentist, Dr. Reid. It’s too awkward to look into the eyes of a man intently scraping all types of nasty gunk out of your mouth: stains from incisors, plaque from canines, and tartar from molars. Dr. Reid is a tall man with greying hair. I have been coming to his practice for half my life. Twice a year, every year, for ten years. The doc still looks exactly the same as he did back then.

I used to dread going to the doc for my biannual cleanings. Within minutes of hearing “open wide,” my gums would be aching and stinging and the doc would be shaking his head self-righteously, chastising me.

“You have very puffy, bleedy gums for a kid your age,” he would say, or “There’s a lot of tartar back here.”

I became apprehensive of having my gums excoriated by the doc’s tools and my morale by his judgement. As a kid, I was lazy about brushing my teeth and would only brush diligently twice a day in the time leading up to my cleanings as if cramming for an exam.

In 2004, an article titled “Stress, burnout, anxiety and depression among dentists” published in the Journal of the American Dental Association found that dentists are “prone to professional burnout, anxiety disorders and clinical depression.” The report attributed this to the nature of the profession and the typical personality traits of people who choose to be dentists.

The operatory usually is small, and the dentist’s focus is on an even smaller space, the oral cavity. Dentists are required to sit still for much of their workday, making very precise and slow movements with their hands, while their eyes remain focused on a specific spot. Isolation from other dentists also is common. Additionally, a study has shown that dentistry tends to attract people with compulsive personalities, who often have unrealistic expectations and unnecessarily high standards of performance, and who require social approval and status.

Ouch. For many, however, this is old news and common sense. If Mother Teresa had to spend 8hrs/day, 5 days/wk with her digits enmeshed in some poor mope’s nasty, halitosis-ridden orifice, her eyes staring at bleeding gums and ossified plaque, even she would go crazy.