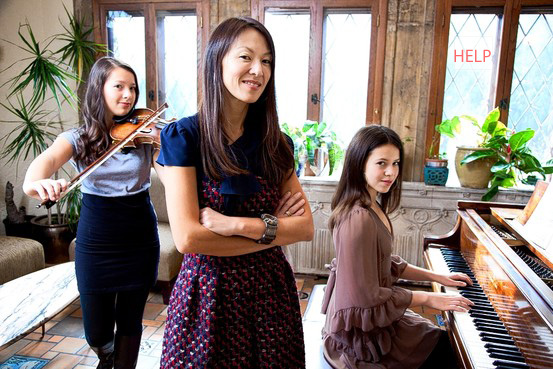 Today I read the excerpt from Amy Chua’s book Battle Hymn of the Tiger Mother that catapulted this nation into a long and unsatisfying discourse about parenting. Yes, I’m a little behind the times. Forgive me for not watching “Good Morning America.”

After reading the excerpt, I am in disbelief. Chua included in her list of things she never allowed her two daughters to do, “not be the No. 1 student in every subject except gym and drama.” She should be ashamed of herself. My children will be the No. 1 student in everything, including gym and drama. Not pushing my kids to be all they can be in every human endeavor means I don’t love them enough to believe in them.

Getting straight A-plusses and playing the violin better than Paganini is a joke. My kids will not only get perfect scores on the SAT but also learn to make their own pianos and violins. That’s right. From wood, cat guts, blood, and sweat. And their violins will sing sweeter than Stradivariuses. My children will compose their own classical music while in diapers, invent instruments superior to the piano, and usher in the renaissance of classical music.

They won’t lag behind their peers in physical challenges either. They’ll break world records in swimming. They’ll achieve sub-three-minute miles. The Ironman Triathlon will be a cake walk. Unreasonable you say? Not if you put your kids through a regimen equivalent to the United States military’s special forces training. I’m talking about the whole shebang. Mental, physical, and psychological excellence requires practice and hard work. If my kids break after being waterboarded, that only means they weren’t trying hard enough.

Chua’s kids sound like a bunch of wimps. It’s easy to follow parental orders, not eat for days, and surrender one’s childhood. Being parachuted into the Afghan-Pakistani border, evading capture and beheading by dozens of militant factions, and bringing peace to the region is a challenge that actually requires brain power.

I call this form of parenting the Dragon Dad method. According to the New Yorker, Chua calls herself a “Tiger Mom” because she was born in the year of the tiger and tiger people are “powerful, authoritative, and magnetic.” Dragon Dads make dumpling fillings out of Tiger Moms. And these dumplings are delicious.