Have you ever wanted to analyze the traffic between a mobile app and its servers or reverse engineer a mobile app’s non-public API? Here’s one way.

The basic principle is to proxy the traffic from the app through a computer you control on which you can capture and analyze traffic. If the app you’re interested in is using an unencrypted protocol like HTTP, this is pretty easy. Just run a proxy on your computer and configure your mobile device to proxy network traffic through your computer’s IP.

Most apps these days, however, use encrypted protocols like HTTPS (or are even required to by default by mobile OSes). Data at the TCP layer and below like IP addresses and port numbers are visible in plaintext, but all application level data at the HTTPS layer is encrypted. So you run a proxy that supports HTTPS on your computer, but then your app doesn’t trust the self-signed TLS certificate your computer presents. Mobile apps used to trust certificates that the mobile device’s system trusted. So you could just download the self-signed certificate onto the mobile device and configure the mobile OS to trust it. But these days mobile app frameworks let developers customize their app’s network security settings (like so for Android).

Let’s say your mobile app has custom trust anchors or pins certificates. What do you do now? You can either

I’m not familiar with how to do this on iOS (there seem to be good resources out there like this) so will show how to do option two on Android.

I don’t have an Android so used an emulator called Genymotion. I created a Samsung Galaxy S9 virtual device which is has a recent enough Android OS to run most mobile apps. In order to install the mobile app from the Google Play Store I had to install OpenGApps. I think I’m also able to download the APK from the web and drag and drop it into the emulator to install.

To install the Charles cert, I had to open this page in Chrome. The built-in browser in the emulator didn’t seem to prompt me to download the Charles cert, but Chrome did. I installed Chrome by install OpenGApps and then installing Chrome from the Play store. I think I also needed to configure the Android device to use Charles as its proxy with these steps in order to get the certificate download prompt. Then I made the Android device trust it.

I used `apktool to decompile the APK.

The app only allows cleartext to the above two domains. I don’t see any pinned certificates, but there must be some defaults since the app didn’t trust the same certs trusted by the Android OS. So I updated network_security_config.xml to be the following.

Then I tried recompiling the patched APK but got the following error.

This Github issue comment suggested I run that command with the --use-aapt2 switch. Then I got another error.

This PR fixes the above on Linux and Windows. As of this writing, it’s not released yet. So I had to build from source on an Ubuntu VM.

I signed the patched APK. First I generated some keys. I’m not sure if certain signing and key algorithms are required, but these are the ones I used.

Then when dragging and dropping the patched APK into the virtual device, I got an error saying the app couldn’t be installed. In these cases, generating the logs and grepping through them for errors like INSTALL_PARSE_FAILED_NO_CERTIFICATES and INSTALL_FAILED_VERIFICATION_FAILURE helps. I fixed this last error by disabling USB verification in the virtual device settings. The setting for this is inside the virtual Android device itself under “developer settings.”

I made sure the traffic was proxied through my computer, the patched app started successfully, and I was able to see unencrypted data in Charles! 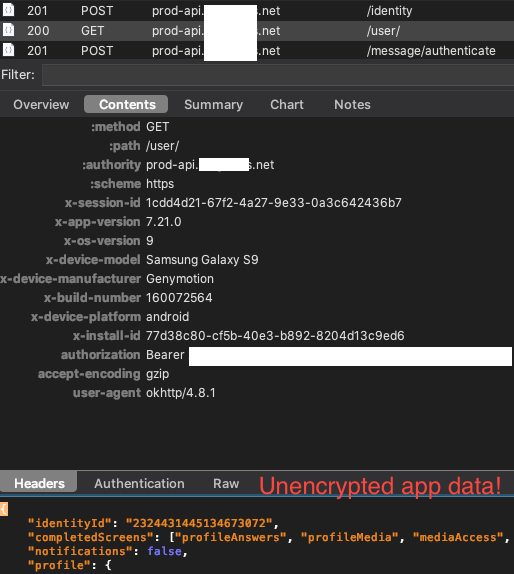