Please excuse the rambling nature of this post. It’s more like a collection of thoughts mushed together than a coherent essay.

The New York Times published an opinion piece a few weeks ago by a university cultural studies instructor named Andrew Reiner about how conventional gender norms for men in the US are restrictive and can harm not only women but also men themselves. In “Teaching Men to be Emotionally Honest” Reiner said we teach boys from a young age what emotions they are allowed to express. Boys are taught to convert their sadness or misery into anger; vulnerability and compassion is best left to women and somehow makes a man less manly.

Reiner advocates for the creation of men’s studies as an academic field in its own right along with campus resource centers that would create “safe spaces” for guys. He points out, however, that people can be skeptical of such efforts. A proposed Men’s Centre at Simon Fraser University created debate over its intentions and usefulness.

But wouldn’t encouraging men to embrace the full range of their humanity benefit women? Why do we continue to limit the emotional lives of males when it serves no one? This question is the rhetorical blueprint I pose to students before they begin what I call the “Real Man” experiment.

Reiner’s piece makes me think about how masculinity has meant different things in different times and places. Crying, for example, was more accepted in Greek heroes than it is in today’s male leaders. The website Cracked.com says (yes, I’m quoting cracked.com),

As recently as the 19th century, male tears were actually celebrated as a sign of honesty, integrity and strength. And not in the “you’re brave enough to show your weakness” way, but just as a symbol that you actually gave a crap. And it probably also meant you were confident that no one would mock you, since you had just won a battle or torn the limbs off of a monster with your bare hands.

Odysseus is one of Greek mythology’s ultimate badasses. He helped win the Trojan War and is the only one out of all the suitors strong enough to string his bow and shoot it through a dozen axe heads. He cries many times in the Oddysey like when King Alcinous of the Phaiacians reminds him of the Trojan War. On the other hand, a contemporary male hero like James Bond, particularly Daniel Craig’s portrayal, is stoic. I can’t recall when he sheds tears. Your lover Vesper Lynd dies and your boss asks if you need time? Decline and renounce her by saying, “Why should I need more time? The job’s done. The bitch is dead.” Then go back to pounding martinis and bashing heads.

I wonder why being emotionally honest, not living an emotional lie by bottling it all up, or acknowledging one’s vulnerabilities isn’t in today’s prescribed male script. When and why did this change?

The comedian Bill Burr performed a standup bit on how it was absurd that if he showed any kind of sensitivity his male friends would insinuate “maybe, just maybe [he] wanted to suck a dick.”

It was the middle of October…my brain was like “You know what? Fuck this! I’m getting a pumpkin.”

This is how much of a maniac I am…It took me four trips to go to the supermarket to finally be able to buy this goddamn pumpkin. Because everytime I would walk in there to get it, I’d be thinking all these happy thoughts. This is a great thing. I’m embracing the holidays. It’s going to bring me and my girlfriend together. This is a very loving thing to do. And I’d reach out to grab it, and all I’d hear in the back of my head is, “What are you? A fag?” And immediately I had to turn around and walk out.

Let me explain that joke to functional people in the crowd. This is how it works with guys. Anytime you do anything remotely sensitive, heartwarming, anything that’s going to make you more of a loving, caring individual, immediately all your guy friends suggest that maybe, just maybe, you want to suck a dick.

Even though this was several years ago and the comic industry is crasser and seems to have a more machismo code of conduct than other professions, Burr’s point still holds today. He even argues that the repression of these emotions causes men to die earlier.

“What are you? A fag?” is the reason why guys drop at 55 out of fucking nowhere. It’s literally from five decades of just supressing the urge to like hug a puppy, admit a baby’s cute, say you want a cookie. You just gotta keep pushing it down. “Fuck that I’m not sucking dick. I’m not sucking dick!”

Perhaps this is why men have much higher rates of suicide than women according to many studies. In the US, men are estimated to die from suicide three to five times more than women. Some reasons for this include the fact that women are more likely to maintain friend and family ties that support them and are more likely to see therapists. I sometimes joke that it’s nice how a group of girlfriends will help and look after each other during a night out on the town. But if I go out with my guy friends, we see ourselves as independent people who happen to be walking together. I could get hit by a bus, and it’d probably take them a block or two to notice.

I suspect restrictive male norms can often prevent slightly disturbed men from getting the help they need to pose less of a risk to themselves, their loved ones, and society. Reiner writes, “But wouldn’t encouraging men to embrace the full range of their humanity benefit women? Why do we continue to limit the emotional lives of males when it serves no one?” I’m reminded of Elliot Rodger’s killing spree which was fueled by mental health issues and a profound sense of alienation and a recent murder-suicide in the Bronx.

But back to the original topic of emotional honesty and society not encouraging men to express sentimental emotions. Some people think guys are simple and not as emotionally complex as women. We’ve all seen this visual metaphor before: 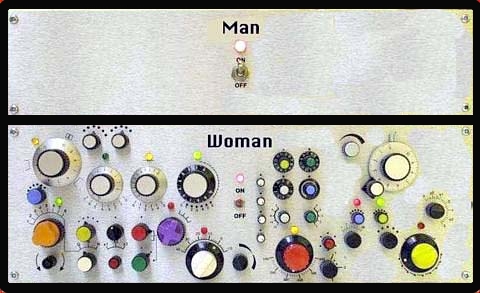 We are taught to think this is an innate, fundamental difference between men and women. I’m pretty sure there’s more than one emotional button for men. They may be different buttons that do different things, but it’s a fallacy to think men are this simple. Society tells us not to use certain buttons. But I love the range of human emotions, and I’m going to let myself to use all of them.

There are certainly situations where showing vulnerability or doubt isn’t appropriate. If you’re Ernest Shackleton trying to guide your men through the tremendous ordeal of being trapped in an ice floe in Antarctica for two years, try not to freak everyone out by crying. But sometimes it’s alright to do so.

This video of a toddler getting a shot shows how boys are taught from a very young age to suck it up and be a man. He’s a child. I’d give him a hug and tell him it’s OK to cry.